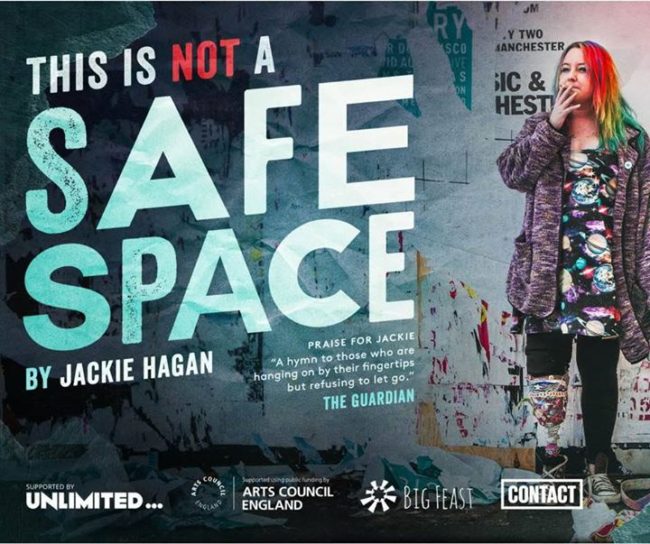 Award winning poet and performer Jackie Hagan’s latest show, ‘This is Not a Safe Space’, explores the impact of benefit cuts on disabled peopled and those living on the margins of society. The creative mix of poetry, puppetry, stand-up comedy and audience participation draws on first-person interviews with 80 working-class people. With an emphasis on class, mental health and disability, Hagan celebrates the weird and wonky lives of those excluded from the mainstream.

Jackie Hagan is herself a queer, bipolar amputee, raised on a council estate. Her work seeks to challenge the ways in which current society relentlessly stereotypes working-class, disabled individuals.

Following on from her previous success with the solo show ‘Some People Have Too Many Legs’ and her play ‘Cosmic Scallies’, this theatre maker once again intertwines spiky humour and quirky expression, resulting in a passionate, provocative and affecting production. 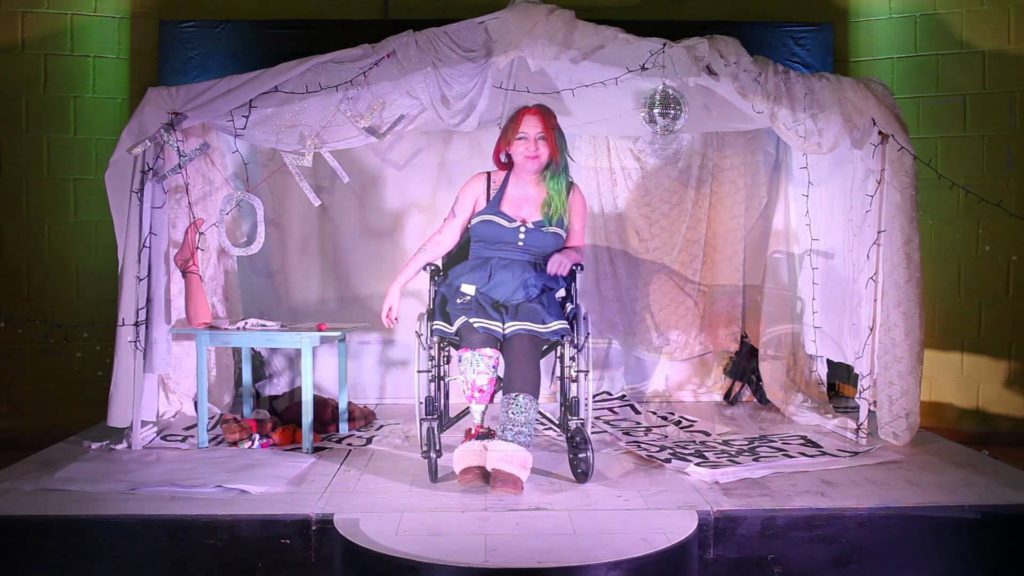 1. Jackie, could you please tell Disability Horizons readers about your disability and how it has affected you and your career?

In summer 2013 I suddenly had my leg amputated [following a series of blood clots and infections]. When I left the hospital they gave me a list of things to avoid, one of them was falling over. I toured a show that year called ‘Some People Have Too Many Legs’, which won some awards.

I had been writing and performing for some time and I had always been a disabled performer – I am partially sighted, have bipolar disorder and a life limiting autoimmune disease. But, having one leg is something people can get their heads around a lot better, people like something they can see. And so it attracted a lot of attention.

As such, when people invite me to diversity events to talk about the leg I often open with a leg gag and then go on to talk about invisible disabilities or class.

2. How and why did you become a poet and performer?

When my Mum was 16 she moved from the thrill and glitter of Liverpool to an isolated new town to have me and my brother. As such, she herself became a disco, she became thrill and glitter. How else are you meant to cope? It meant I grew up to be unafraid to speak my mind in the odd way i found natural. I wasn’t ever encouraged to toe the line or be normal. 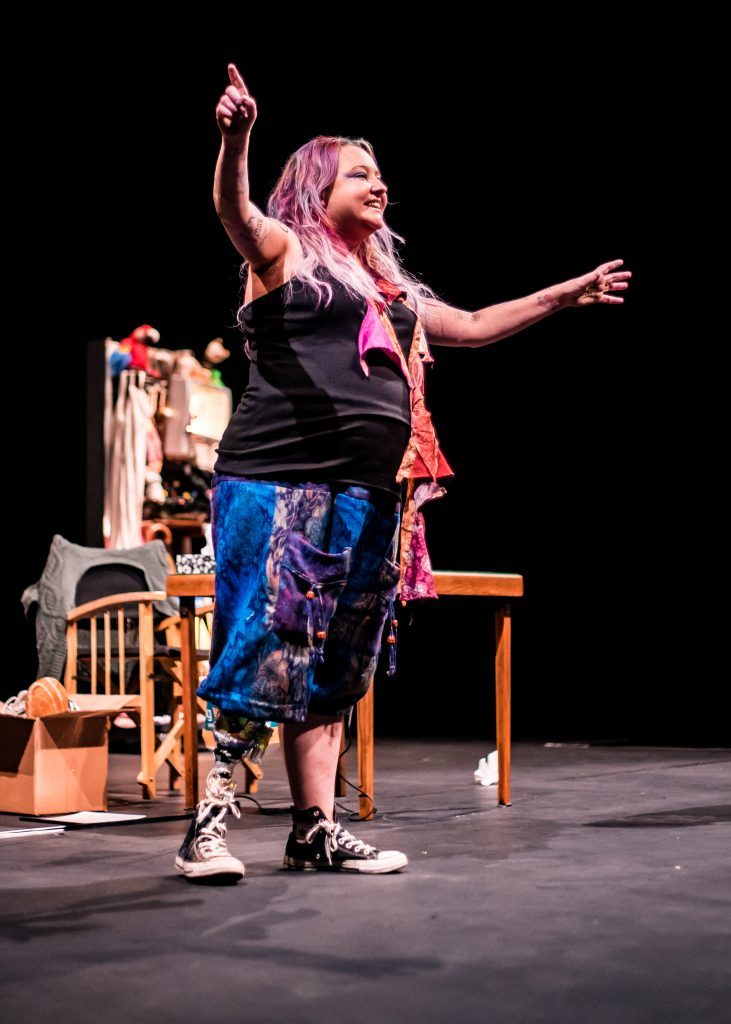 3. How does your class, background and disability influence your work?

It means I’ve always got a cob on and I’ve got loads to say that doesn’t often get said. I’ve got council estate bones and they rattle when someone slags off a young lad for dealing or looting or having a big massive telly. I understand why this stuff happens. I’m not saying we’re saints: I’m not an idiot, but I’m closer to the action, I can talk in a measured way about the real reasons. I can give you stories and images that aren’t exaggerated or underplayed. I know what I’m on about.

Obviously it also means I come up against a tonne of prejudice and moments where people tilt their head to one side and use that sing song lilt to the voice “aw, are you in a wheelchair?” etc. It’s all total bollocks and the most satisfying way to show people is by being awesome.

4. Why did you decide to write this show, and why now?

Disabled people and those on benefits are represented in the media one dimensionally. Benefits claimants are shown as sinners: [the TV show] Benefits Street depicts us as if we’re stupid and should just try harder. Disabled people on the other hand are represented as saints, super-humans and paralympians. Real people just aren’t like that.

5. What is the meaning of the title of your new show?

The government has messed up, massively. People are committing suicide and losing their homes. We’re obviously not safe. The new generation of kids have no security in their future, never mind jobs and homes. They’ve got climate change to worry about! Of course they are obsessed with safety, of course they need to create safe spaces.

People might be used to my old work where I would make hard topics fluffy and palatable. But in this show I need to give it to people straight. That doesn’t mean it’s unrelenting bleakness – no one can take that in, and audiences don’t deserve to have to put up with that. I know how to keep an audience with me. There’s lots of comedy and tenderness in the show, but i also know how to give an audience realities that need to be passed on. We desperately need people to empathise.

We are not safe. It is not fair. The world is not a safe space. The show is not a fairytale.

6. It celebrates and puts forth the lives and experiences of a section of society often misrepresented or ignored entirely by the mainstream. Why do you think that is?

If you [society] ‘other’ us, then you can feel less empathy and understanding. If you lack empathy, it gives people a free ride, it makes the problem go away, because it means we don’t matter.

7. Based on 80 interviews, your show intertwines poetry, DIY puppetry and stand-up comedy. That’s quite an eclectic mix! How do you begin to plan and produce such an original and engaging piece?

Humans don’t think in linear stories, we think in snippets and recurring images. It makes absolute sense to me to collect voices and stories and for me to keep on writing and writing. I then siphon it all down into central questions that I want the audience to think about, and eventually get right down into the essence which is the hour of the show.

In real talk that means A1 flipchart paper, post it notes, about a thousand gallons of tea and one amazing sound producer (Dave James who sat in a room and listened to 16 hours of interviews with me several times). I eat when I make stuff and put on about two stone. But I’d rather be a fat writer than frustrated and at my ideal weight!

8. What do you hope audiences will take away from the show? 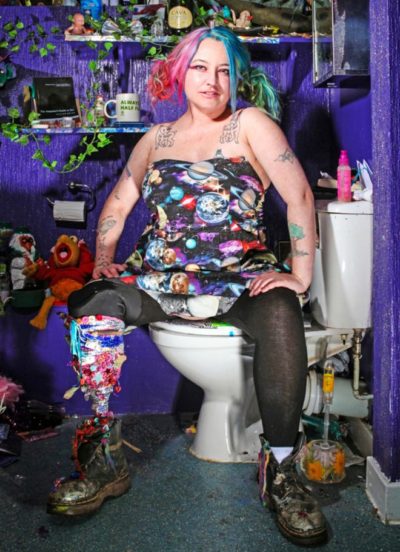 I’d like to thank Jackie Hagan for taking the time to speak with me.

My interview with Jackie was originally published by Disability Horizons, for whom I am a frequent contributor.