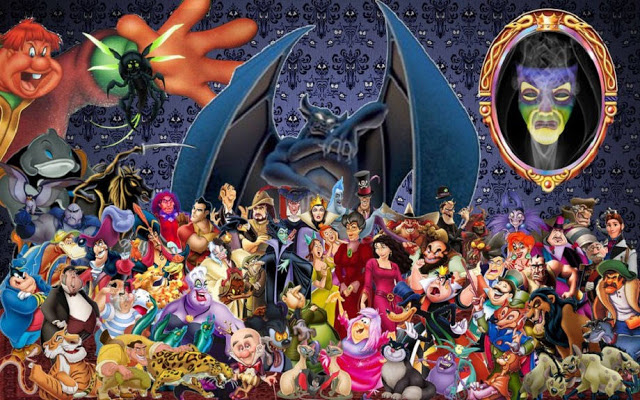 Sometimes, you just need a little escapism and light-relief to raise a smile. What better way than a Disney villains showdown with the cleverest of clever little wenches, Miss Lucy-Lu Hudson!

I’m already battling it out with fellow MD’er, Mitch (twodoughnuts), in a series of ‘Top 5’ blog posts.

So far, we’ve debated our favourite songs and actors. I apologise in advance for Mr Twodoughnuts ~ he’s so very young and uncultured!

So, my wise wench of a friend, Lucy, kicked things off with her pick of the Top 5 Disney villains (damn, she’s good!)

Here, I attempt to take her down with my comeback (well, it is a wench war!) Though, I freely admit, I think she’s got this first round in the bag.

Let us know what you think…!

This is without doubt the darkest and most menacing sequence in Disney history. I was only three or four when I first saw Fantasia. I swear, even at that age I thought it was one hell of a trippy film!

The demonic Chernabog (funky name, right?), based on Slavic folklore, is God of the Night. He is the representation of pure evil, with fearsome wings that form the peak of Bald Mountain, which leers ominously over the village below.

As night descends, the delighful Mr Chernabog unleashes hellish realms and summons sinful spirits to watch them dance maniacally. He then throws them into the mountain’s fiery pit before a new day dawns. Well, that’s not nice at all is it!

I’m flipping glad I don’t live in that village!

How is this a kids film, seriously?!

I was eight when this was released. To this day, it’s one of my Mum’s favourite Disney films. But call me crazy, I think it’s all a bit much for kids of that age, with hard-hitting, mature themes including religion, sin, lust and genocide!

(Sorry folks, there are no happy-clappy, ‘bibbidi bobbidi boo’ moments in The Hunchback of Notre Dame!)

I’ll be honest, it still freaks me out. Not least because of the lack of magical element so typical of animated Disney features. Okay, so there are talking gargoyles, but hey, they needed something to lighten the mood a little!

Frollo, Paris’ Minister of Justice (oh, the irony), is the first Disney villain to attempt infanticide, having almost drowned a newborn, only to be stopped by the archdeacon who accuses the corrupt official of murdering the baby’s innocent gypsy mother. To atone for his sin, Frollo begrudgingly agrees to raise the child as his own. He cruelly names the baby Quasimodo, meaning ‘half-formed’. (Dave would have been a better choice, surely?!)

The manipulative Frollo hides Quasi away in the bell tower, excluding him from society, telling him he will never be accepted by the world due to his unusual physical appearance. What an ass!

Unlike other Disney Villians – often magical and mythical – Frollo the super-creep is so threatening and unnerving because he is such a realistic representation. He is, after all, just a man. A pervy old man (oi, Esmeralda, be mine or you can burn!) fuelled by power, skewed religious motives and a licentious desire for busty babe Esmeralda.

She’s the original diva bitch, driven by vanity, and all credit to her, she’s got one hell of a pout going on!

I can’t help but be on the side of the Evil Queen who so easily outwits squeaky-voiced, simple Snowy (never trust a girl who shares a house with seven old men. Methinks she’s not quite as pure as snow!).

Yes, she’s gone to all the effort of transforming into a horrifyingly wretched old wench. But y’know, needs must!

If THAT poked it’s head through your front window and tried to tempt you with a juicy red apple, would you willingly take a bite? Or would you tell the interfering, hook-nosed, eye-bulging wrinkly to buggar off?!

I rest my case. Snowy, it’s your own bloody fault, love!

Arch-nemesis to the famous mouse detective Basil of Baker Street, crimimal mastermind Ratigan is a comically ruthless brute. For one thing, he is voiced by horror legend Vincent Price (Michael Jackson’s Thriller, anyone?!).

A status-obsessed professional crime lord, his ultimate ambition is to overthrow the mousey monarch and proclaim himself “supreme ruler of all MOUSEDOM”. Aim high, I say!

Unflinchingly wicked, conniving and with no morals, it is revealed in his singy-songy dance number that he previously drowned widows and orphans. What a pleasant chappy!

Ratigan declares himself to be a “superior mind”, yet is angered when called a rat by intoxicated minion Bartholemew, despite the fact he is indeed a rat. The clue’s in the name, dude!

His extravagantly ostentatious appearance conceals an intimidatingly feral visciousness. Though generally maliciously cheerful, calm and composed, his manacingly savage violence is unleashed in a shocking final showdown with heroic Basil.

“I find delight in the gruesome and grim
‘Cause I’m the magnificent, marvelous
Mad Madam Mim” ~ A bit morbid there, love!

The eccentric, shape-shifting Mim is a proper tricksy witch, and rival to the legendary wizard Merlin. We’re introduced to the purple-haired hag when young Arthur, in the form of a bird, mistakenly flies into her not-so-classy abode. Having declared his alliance to the all-powerful Merlin, Mad Madam Mim attempts to “destroy” the boy. Seems fairly reasonable to me!

For all her arrogance and mischievousness, I can’t help but root for the haggered old biddy. I mean, for one thing, she has purple hair! (I remember, as a young kid, being fascinated with an elderly neighbour who had a purple rinse. Super cool!)

The villainous Mim is LOUD, bat-shit crazy and pessimistic yet playful. A ditzy and deceitful game-player, she repeatedly cackles, “I win, I win” – as do I when defeating Mr twodoughnuts at ‘Blog Wars‘.